Have you ever lost something?

A favorite toy, perhaps? Or even a pet?

In the best case, when we lose something, some kind soul finds it, returns it, and we offer them our thanks.

But in the story we’re about to hear, when a generous person finds and returns a lost item, she doesn’t get thanked. She gets taken to court!

Our story is called “The Red Velvet Purse.” We’ve found versions of this folktale from a number of places, including China, India, Ethiopia, and Romania.

Voices in this episode include Thais Harris, Mike Smith, David Swanson, Dawn Ursula, and Elisa Donovan, whom you grown-ups might recognize from Clueless, Sabrina the Teenage Witch, and Beverly Hills 90210. Her new memoir, Wake Me When You Leave: Love and Encouragement via Dreams from the Other Side, is out now.

This episode was adapted for Circle Round by Rebecca Sheir. It was edited by Supervising Producer Amory Sivertson. Original music and sound design is by Eric Shimelonis. Our artist is Sabina Hahn. 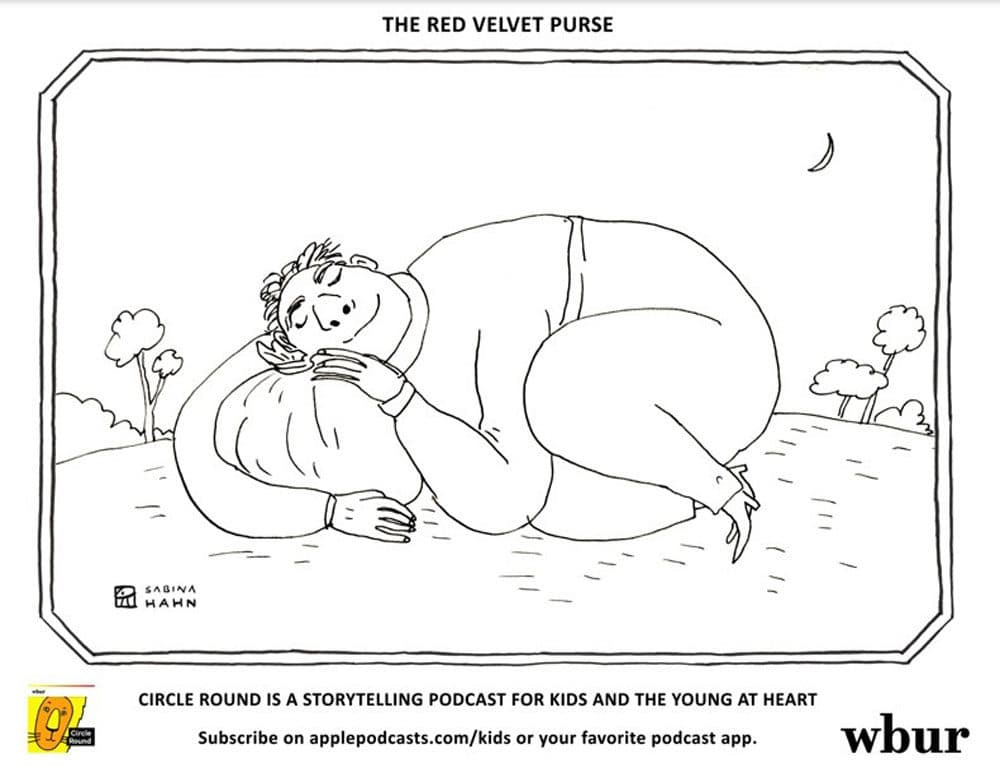 ADULTS! PRINT THIS so everyone can color while listening. We’re also keeping an album so share your picture on Facebook, Twitter, Instagram, and tag it with #CircleRound. We’d love to see it! To access all the coloring pages for past episodes, click HERE. Our resident artist is Sabina Hahn and you can learn more about her HERE.

Things To Think About After Listening

See what you can find by doing a Color Scavenger Hunt!

Take a paper bag, draw nine small squares on it, then use a marker or crayon to fill in each square with a different color.

Take your bag and look for objects that match the colors on your squares. You can hunt outside or inside.

When you’re done, show your items to a grown-up, and see how many of the colors you collected!

The guqin dates back more than 5,000 years. (courtesy: Eric Shimelonis)

The guqin is a plucked seven-string Chinese instrument similar to a zither. The guqin is a relatively quiet instrument, with a range of four octaves. With a history dating back more than 5,000 years, this ancient musical instrument is often referred to as the “father of Chinese music.” Through the ages, many have believed the guqin has the power to link humans to the heavens. Some have claimed it’s able to summon ghosts and cure illness, as well as make birds dance and fish fly!

NARRATOR: There once was a merchant who traveled from town to town and country to country selling goods.

He was one of the most prosperous merchants around, because of the curious way he conducted his business.

MERCHANT: (total showman) Step right up, folks, and take a gander at these mangoes! Each and every one of these beauties was personally picked from a tree owned by the Empress of Kazmainiopolis, a country so small you won’t even find it on a map! (beat) And check out these furs, people! They come from the rare and exotic throg-bellied shreef! A six-footed mountain-dwelling creature that’s only been seen by ten people! Including yours truly!

NARRATOR: Everywhere the merchant went, he made utterly outrageous claims about his wares, so that the stuff would seem more desirable, and he could charge more money.

And you know what?

Customer after customer fell for his flimflam. And every evening, when the marketplace closed and emptied out for the day, the conniving merchant would stay behind and count the coins jingling inside his big red velvet purse.

MERCHANT: (laughing as he counts his money) Ha! Ha! Ha! I can hardly wait to see how much I swindled from the silly saps at the marketplace today! One… two… three… four… five… six…

NARRATOR: Then, once he was done…

NARRATOR: …the greedy, dishonest fellow would load up his horse and ride to the next town, to see how many more unsuspecting customers he could separate from their money.

One day, the merchant was particularly on top of his game…

MERCHANT: Gather round, folks, and smell this cinnamon! It was ground to a powder using honest-to-goodness moon rocks! And this perfume! It’s made by mermaids!

NARRATOR: …and as a result…

NARRATOR: …his red velvet purse was bursting with more money than ever!

NARRATOR: Like always, the merchant loaded his horse and set off for the next town. But this town was rather far, and after galloping over hills, cantering through meadows, and trotting past fields of farmland, the merchant decided to stop beside a river to camp for the night.

The merchant always slept with his red velvet purse under his head, to keep it safe. But when he reached into his saddlebag to retrieve it…

MERCHANT: Goodness gracious and gracious sakes! My red velvet purse isn’t here! I must have dropped it somewhere between that last town and this river! But where? My horse and I covered so many miles. How will I ever find those 500 gold coins?!? I must retrace my steps!

NARRATOR: So the merchant hopped back on his horse. And with the full moon lighting his way, he sped back in the direction he came, his eyes fixed on the ground all the while.

Before long, the sun was rising, the merchant was back at the town where he started, and his red velvet purse was nowhere to be seen.

Dog-tired — but determined to reunite with his money — the merchant tied up his horse and returned to the marketplace, which was already bustling with people. The desperate merchant approached all of them one by one.

MERCHANT: Um, excuse me! Have you seen a red velvet purse?

MERCHANT: (turning to someone else) Uh, pardon me! Have you seen a red velvet purse??

MERCHANT: How about you?

NARRATOR: This went on for hours. And as time ticked away, it dawned on the merchant that he was going to lose a whole day of business searching for his purse!

MERCHANT: …Which means I’m going to miss on making even more gold coins! Oh dear. Maybe I should just throw in the towel and get back to work!

NARRATOR: But just as he was about to return to his horse and retrieve his wares…

FARMER: Hello, sir? Are you the one who lost a red velvet purse?

NARRATOR: The merchant turned and saw a farmer wearing scruffy overalls, a torn straw hat, and a friendly smile.

FARMER: I live way out in the countryside, and when I got up to feed the chickens this morning, I found this on the ground near my wheat field. Is it yours?

NARRATOR: The merchant gasped as the farmer held up the red velvet purse.

FARMER: I have to admit, when I felt how heavy the purse was, my curiosity got the better of me and I just had to see what was in it. Then I counted all 500 of those gold coins, and I just knew I had to get this purse back to its rightful owner. And look! Here you are!

NARRATOR: The merchant snatched the purse and began counting the coins. His heart soared when he saw all 500 of the coins were still there. But his heart fell when he considered how many sales he had already lost today. He was on such a roll this week, he could have easily netted another 500 coins! At least!

The money-grubbing merchant was determined to make up for his lost profits. And suddenly, he knew just how he would do it.

MERCHANT: (darkly, as he continues his scheme) And so did I.

NARRATOR: The merchant narrowed his eyes.

NARRATOR: The farmer shook her head.

MERCHANT: You don’t??? You mean, you don’t understand lying? Deceiving? Telling people things that simply are not true?

FARMER: But I’m not lying, sir! You have to believe me!

NARRATOR: By now, a crowd of onlookers had gathered around the merchant and farmer.

NARRATOR: A police officer noticed the commotion and came striding over.

OFFICER: What’s with all the ruckus, folks? What’s going on here?

NARRATOR: The merchant flashed the officer a grateful smile.

MERCHANT: Oh, officer! Thank goodness you came! There’s been a robbery! This farmer here stole 500 of my gold coins! Yet she refuses to confess!

FARMER: What?!? I didn’t steal anything, Officer! I swear! I was just returning the red velvet purse that he dropped near my wheat field — (gets cut off)

OFFICER: Okay, enough squabbling, people. Just cool your jets and follow me. I think we’ll settle this matter… in court!

NARRATOR: What do you think will happen when the merchant and farmer stand before the judge?

We’ll find out, after a quick break.

NARRATOR: I’m Rebecca Sheir. Welcome back to Circle Round. Today our story is called “The Red Velvet Purse.”

But when a humble farmer returned the purse, with all the coins intact, the money-grubbing merchant decided he would play a trick. He insisted the purse he lost contained 1,000 gold coins, and accused the farmer of stealing half of them.

The matter wound up in court. When the judge entered the very packed courtroom, she immediately recognized the merchant. He was that unscrupulous salesman from the marketplace! The one who made preposterous claims about his goods so he could charge more money! The judge had witnessed many a customer fall for the con man’s shady tricks.

She took a long look at the sneaky salesman, then took her place at the bench.

JUDGE: Good morning, everyone. This court will now come to order!

JUDGE: Farmer! We’ll begin with you.

NARRATOR: The judge reached down and picked up the red velvet purse.

JUDGE: When you found this red velvet purse, Farmer… how many coins were inside?

JUDGE: And you didn’t take any?

FARMER: I didn’t take any, Your Honor! Someone else might have pocketed a few, but not me. I left all of the coins just as they were.

JUDGE: Mm-hmm… And then what did you do?

FARMER: Well, I closed the purse up again, and I vowed I would go to town and try to find the owner! The way I see it, 500 gold coins is an awful lot to lose!

NARRATOR: The merchant leaped to his feet.

MERCHANT: (grumbles as he sits down)

JUDGE: Now. Back to you, Farmer. When you brought the red velvet purse to the merchant, what did he say?

JUDGE: So, he accused you of stealing 500 coins?

JUDGE: I see … Thank you for your testimony, Farmer.

NARRATOR: The judge turned to the merchant. She could tell the wily fellow had played a devious trick. So she began plotting a trick of her own.

JUDGE: Alright, Merchant… Now it’s your turn. Tell me. Is it true that the red velvet purse you lost had 1,000 gold coins in it?

JUDGE: So you say…

NARRATOR: The judge tapped her chin.

JUDGE: …But the farmer claims she found a purse containing just 500 gold coins.

JUDGE: So you say. But this purse here contains… let me see…

NARRATOR: The judge dumped the contents of the purse onto the bench and counted the coins.

NARRATOR: She fixed the merchant with a stern gaze.

JUDGE: …that this red velvet purse cannot possibly be yours!

MERCHANT: What?!?? What are you talking about?!?

JUDGE: As for your purse, I suggest you seek it elsewhere. And I wish you well in your quest.

MERCHANT: But Your Honor!

NARRATOR: As the merchant spun on his heel and left the courtroom in a huff…

NARRATOR: …the judge turned to the farmer.

JUDGE: Farmer. This court orders you to take care of this red velvet purse until the rightful owner comes forward. If the owner does not materialize within one month’s time, the purse will be yours… as a reward for your honesty. This case is closed!

NARRATOR: Well, as you can guess, no one else came forward to claim the red velvet purse.