K-pop, or Korean pop music, has gone from being a South Korean national obsession to a true cultural export that has created legions of fans around the world. The K-pop boy band BTS has quickly become one of the best-known names in pop music in recent years. While the influence of Western and African American music in the music of BTS is well known, you may not have known that their visual aesthetics, lyrics, and themes also referenced and were inspired by ancient Greek mythology many times.

BTS sees itself in Greek mythology

Many of the most popular K-pop groups used ancient Greek myths as the source material for their songs, the concepts of their music videos, and their promotional imagery. They integrate the rich cultural history of Greek mythology into the tapestry of their aesthetics. Most of all, BTS has captivated the world for the skill with which they combine their influences into a single package where each component sits in the right place.

For BTS, the use of Greek myths is often key to adding a symbolic, meaningful dimension to their immaculately choreographed and manicured visual aesthetic. They draw on the poetic, allegorical and fantastic world for which Greek myths are so famous to give their songs and music videos literary depth and subtext.

BTS is by far the largest K-pop band to emerge from the South Korean cultural phenomenon. They were considered the greatest band in the world and sold more albums than any other act in 2020. Their discography is full of references to Greek mythology: they even appeared as seven Greek gods for their MMA appearance in 2019, literally fusing the band’s identities with the roles and personalities found in Greek myths.

Here are some of the most famous examples of Greek myths in BTS’s career:

The music video for “Fake Love”, a song from their 2018 compilation album Love Yourself: Answer, singer Jungkook receives a key from a mysterious hooded figure. The key is to open a corresponding box that represents Pandora’s box, one of the most famous and notorious artifacts in all of Greek mythology.

Pandora’s Box tells the story of Pandora, wife of Epimetheus and mother of a mortal daughter, Pyrrha. Because of Pyrrha’s marriage to her cousin Deucalion, the gods sent a tremendous flood to destroy the earth and mortals. However, Pyrrha and Deucalion managed to survive and after asking the oracle in Delphi for help, they threw the bones of Pandora to the ground so that the world would be repopulated.

One day Epimetheus asked his wife to look at a vessel. Pandora, unable to curb her curiosity, opened the “box” containing fear and despair, thus releasing it into the world and closing the box just in time to prevent hope from escaping.

BTS ‘music video for their song “Blood, Sweat & Tears” from 2016 revolves around visual references and allusions to the myth of Icarus. The video begins with the entire group seated around a long table with HJ Draper’s painting “The Lament For Icarus” as the background.

The music video shows scenes where member Jungkook is floating in the air, like the flying Icarus, with the painting in the background and bird feathers falling from the sky.

King Minos asked him to build a prison to catch the Minotaur – a mythological creature with the body of a man and the head of a bull – who had become aggressive and violent.

King Minos wanted the Minotaur’s existence to be kept a secret and kept Daedalus and his family, including his son Icarus, imprisoned in a cell. Daedalus collected feathers to create wings for Icarus to use to escape and warned him not to fly too close to the sun. He did not listen to Daedalus: the sun melted his wings and he fell into the sea. 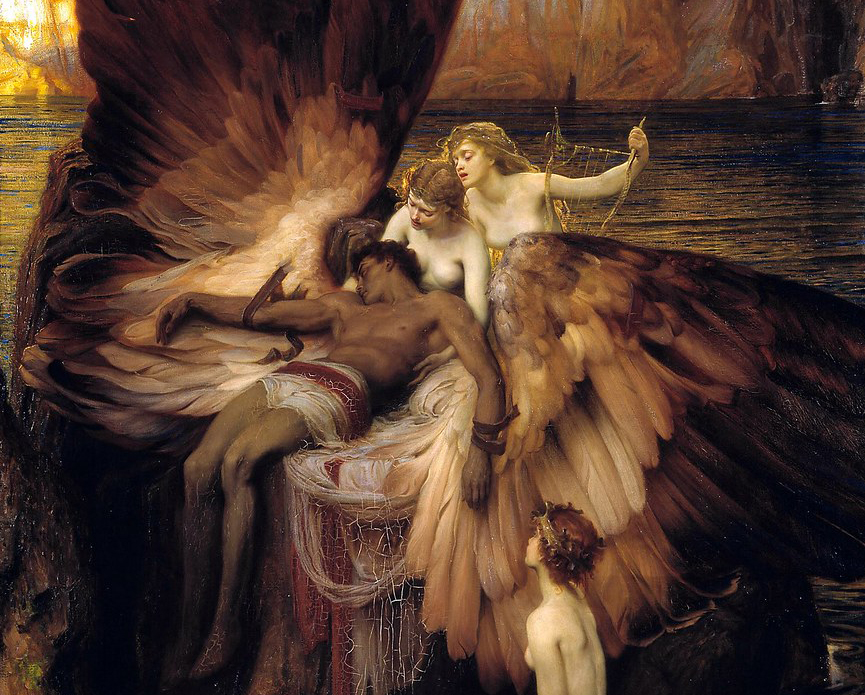 Jungkook’s floating body recalls the tragic and iconic climax of the myth of Icarus, with the falling feathers and floating body representing the melted wings that Icarus left behind in free fall.

The song “Dionysus” from the 2019 album Map of The Soul: Persona by BTS has its namesake from the Greek god of excess, wine and festivity. The track uses the symbolism of Dionysian euphoria as a vehicle for their irresistibly catchy pop, which combines the intoxication of music and dance with ancient and eternal scenes from Greek mythology. The track begins with the line “Just drunk like Dionysus, drink in one hand, Thyrsus in the other”.

Using Greek mythology to explore the wide range of human emotions and experiences, from painful to enthusiastic, BTS adds a contemporary twist to the timeless Greek images of the past and introduces its younger audience to the Greek past.